I promised to report on my Worldcon experience “next week” a month ago.  Better late than never.  But first, some writing news…

I sold a story titled “Time and Not Space” to Galaxy’s Edge Magazine.  It will appear in the November issue.  I will post a reminder and a link when the time comes.  Scide Splitters columns continue with the latest being a review of Unidentified Funny Objects 5.

I’ve been wanting to go to a Worldcon for decades, but time and money have held me back until this year – that and not realizing what I have been missing.  Prior to my experience at MidAmeriConII (that is the name of the 2016 Worldcon held in Kansas City last month), I was concerned that I would be disappointed for two reasons, hype and being an outsider.

The hype concern was due to my having built up decades of anticipation based on all the wonderful stories I have heard about Worldcons past.  How could the real thing live up to the myth fostered in my mind?  The other concern was based on my feeling like something of an alien to my own species.  Yes, I understand that this is not an uncommon feeling among science fiction fans.  We are outcasts.  Even so, I suspected that the SF community would be yet another group where I would not fit in.

I was wrong on both counts.  Worldcon lived up to the hype and I found many kindred spirits.

First, the people, because without them, there is no Worldcon.  The majority of them were friendly and welcoming.  Not that this is unique to SF fandom, but it is a prerequisite to friendship.  Beyond that, I can’t easily explain why I connected so well with so many at the convention.  It was more than just a common interest in science fiction.  Sometimes people connect.  It is a complex thing and I won’t try to analyze it here.

It may have helped that I smoke.  Smokers are the outcasts of outcasts, forced to congregate out of necessity.  It’s kind of like being stuck on an elevator together.  Eventually you will talk to each other, and having nicotine to calm the internal fires, smokers tend to be a friendly bunch when getting their fix.  There is something at Worldcon called BarCon.  People congregate and get to know each other over drinks.  I will call the smoker’s version AshtrayCon.  I don’t know if the word, or something of similar meaning, exists in the lexicon of fandom, but it should.  And when you put BarCon and AshtrayCon together, all the better.

As for other activities, WorldCon has so many appealing things going on at any given time, that you have to set priorities.  I ended up trying to evenly divide my time between my various interests as a writer, a reader, a fan, and a lover of science.  I partook in panels, presentations, kaffeeklatsches, literary beers, book signings, award ceremonies, and wandering the exhibit hall.  But it was always the people that made these events worthwhile.

Worldcon was a blast, which means my brain is mush right now.  I’m going to have to postpone my recap until after my fantasy football draft this weekend (yeah, I know, brain mush part two).  Hello to all the new friends I made at Worldcon.  Check back next week for my thoughts on the Retro Hugos, con events and late night activities vaguely remembered. 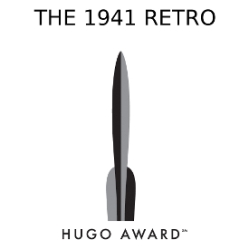 In the November, December and January editions of Scide Splitters, I reviewed humorous stories eligible for the 1941 Retro Hugo short categories (novella, novelette & short story).  I followed this up with a list of “25 Stories Worth Reading Before Making Retro Hugo Nominations” (the list included humor and non-humor stories).  Now that we are into the final phase of voting (the deadline for casting ballots is July 31st), here are my thoughts on the official nominees as I work on filling out my ballot.

First, let me throw out a few statistics.  10 of my 25 “Worth Reading” were humor.  Only two of those made the final ballot.  However, 11 of the final 15 nominees were on my list of 25 recommended reads.  So, on the whole, I would say the nominees are a fairly worthy bunch.  I’m just a little disappointed (though not surprised) that more humor didn’t make the cut.

Novellas – Heinlein vs. de Camp & Pratt.  The only nominee not to make my recommended list was Heinlein’s “Magic, Inc.” so it should be no shock that it ends up at the bottom of my ballot.  I was a little surprised not to see “Darker Than You Think” by Jack Williamson make it.  The reason it did not is largely due to some people mistakenly promoting it as a novelette.  So it was initially announced as a novelette finalist before award administrators realized it was ineligible due to length.

The hard decision for me here is picking between “The Roaring Trumpet” and “If This Goes On…”  I call it a tie, but since I can only give one the top spot, I defer to the old axiom, “When in doubt, laugh.” “The Roaring Trumpet” marked the beginning of the Incomplete Enchanter series.  It is filled with adventure, Norse gods and laughs.  What more could you want?

My nominations that failed to make the cut: “Darker Than You Think” by Jack Williamson & “The Indigestible Triton” by L. Ron Hubbard

Novelettes – All five finalists were on my recommended list, though my favorite (“The Hardwood Pile” by L. Sprague de Camp) failed to garner a nomination.  I knew it was a long shot given the worthy competition.

My top four here are all close together.  But ultimately, 1940 was Heinlein’s year, and it is possible that he could sweep all three short Retro categories.  It was his breakout year as a writer.  He was the Guest of Honor at the 1941 WorldCon in Denver.  He was born in Missouri and later lived in Colorado.  All the stars seem to be in alignment.  And while I more-or-less coin tossed him into second place in the novella category, I won’t do that here.

“Vault of the Beast” is the replacement for “Darker Than You Think” and while it is a solid story and created quite a buzz at the time of publication, it finishes a distant fifth.  “Farewell to the Master” is the classic that became the movie The Day the Earth Stood Still.  Damn good, but just short of Heinlein’s narrative powers.  “It!” is exceptionally well written, but I am not much of a horror fan.  If this were the Retro Stokers, I would have to give it the nod.

My nominations that failed to make the cut: “The Hardwood Pile” by L. Sprague de Camp & “The Voyage That Lasted 600 Years” by Don Wilcox.

Short Stories – The class of this group, at least for me, is “Requiem.”  Maybe younger generations don’t get it, but this story perfectly expressed the yearning for space that I grew up with and that I continue to carry to this day.

“Strange Playfellow,” or “Robbie” as it was later renamed, was the first of Asimov’s robot stories, and a very good one at that.  In many other years, this would be my first choice.  Of the two Brackett stories, “The Stellar Legion” is by far the best.  “Martian Quest” is comparatively amateurish.  Borges’ “Tlön, Uqbar, Orbis Tertius” is good but uneventful.

Last weekend I attended COSine, a cozy science fiction convention held annually in Colorado Springs.  The guest of honor was Jim Butcher, the affable author of the Dresden Files.  Other authors in attendance included Connie Willis, Wil McCarthy, John Stith, Sarah Hoyt, Cynthia Felice and dozens more.  COSine offers an intimate con experience with a variety of activities.  I availed myself of a dozen or so panels and even joined in on a bit of filking (those who know me well will know how much of a shock that is).

After the convention, it was time to make plans for the main event – Worldcon.  I made the mistake of booking my hotel three hours after bookings opened and missed out on the cheapest, or should I say most economical, rooms.  Maybe I will be able to find a roommate to share the cost.  In any case, I will be at MidAmeriCon II in Kansas City this August (that’s the Worldcon) and hope to meet some of the people whom I have only conversed with across the internet.

With my registration and hotel room for MidAmeriCon all set, the next step will be to make nominations for the Hugo and Retro Hugo Awards (to be handed out at the convention).    I will post more about the Hugos and Retro Hugos tomorrow.  If it is not obvious enough, this is a new website and I have a ways to go in setting it up (compounded by a learning curve in figuring out how all this works).